Following two sell-out ZOOM cabaret events, The Cáca Milis Cabaret will rock on with a special, spooky-themed Online Night of the Arts for Halloween.

Storyteller and Pagan Priestess Deirdre Wadding kicks off the show with a Celtic New Year blessing and a sean nós tale.  Hostess Helena Mulkerns will sing some classic cabaret and we’ll have a video from Josh Johnston, featuring music from his brand new CD, Where We’re Standing Now.

Award-winning author June Caldwell, whose cutting edge debut novel Room Little Darkerwowed critics and secured her a second book deal with John Murray of London, beams in with a story from Dublin.

Watch out for new poetry from Sinéad O’Reilly and Seán Kiely, as featured in the upcoming anthology Caesura, edited by Tom Mooney.

And in a Cáca Milis Cabaret multi-media segment debut, we’re looking forward to some Social Media madness from Irish Social Media influencer Ruth Codd, who uses her quirky online presence to raise awareness about being an amputee and seeks to break down barriers surrounding the subjects of disability and mental health in Ireland.

The Cáca Milis Cabaret is an eclectic evening of the arts that has become a staple in the Irish South East’s arts scene, delivered somewhat in the joyous spirit of old time Music Hall, but presenting all original work with an emphasis on technical quality, diversity and artistic excellence. Since 2009, founder Helena Mulkerns has presented around 600 Irish and international performers on its boards – both in The Wexford Arts Centre, Dublin and further afield.

This is a ZOOM event and comes to you through the technical expertise work of the Wexford Arts Centre – Ireland’s oldest regional arts centre.  The WAC is a registered charity, and all ticket sales go towards supporting cabaret artists and the continuing work of the centre, whose work at this time is now more important than ever.

Seating, although on ZOOM, is limited – purchase your tickets here 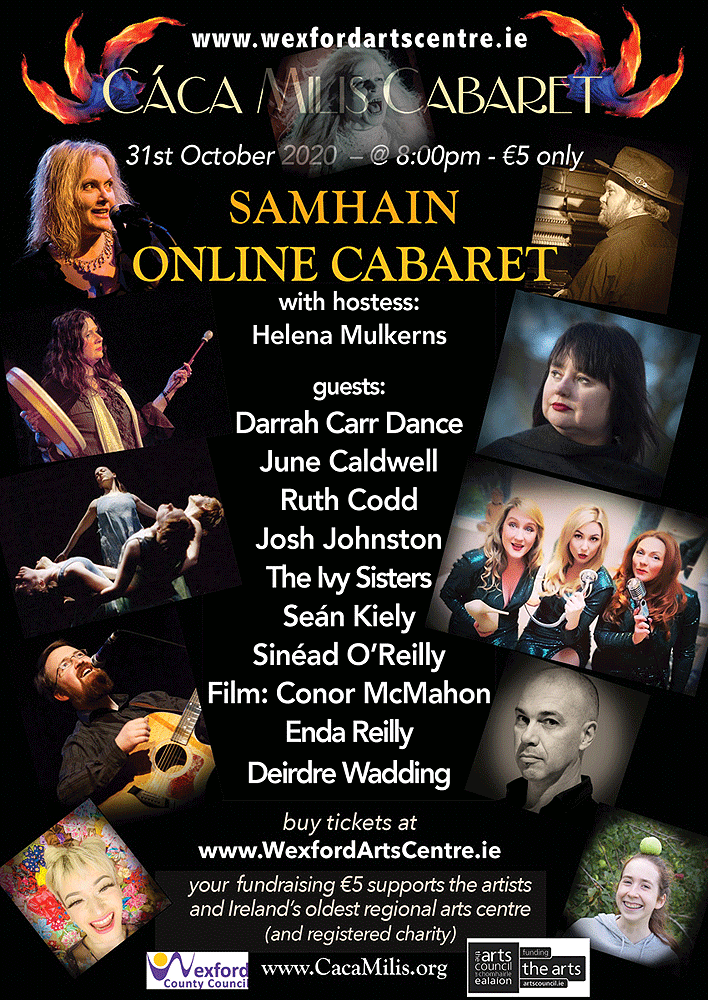 We invite you to explore all events offered at the literary festival here:  www.WexfordLiteraryFestival.com
and  don’t forget to check our newly-rebuilt website (still in-progress):  www.Cacamilis.org

Seating is limited: book your ticket early at: