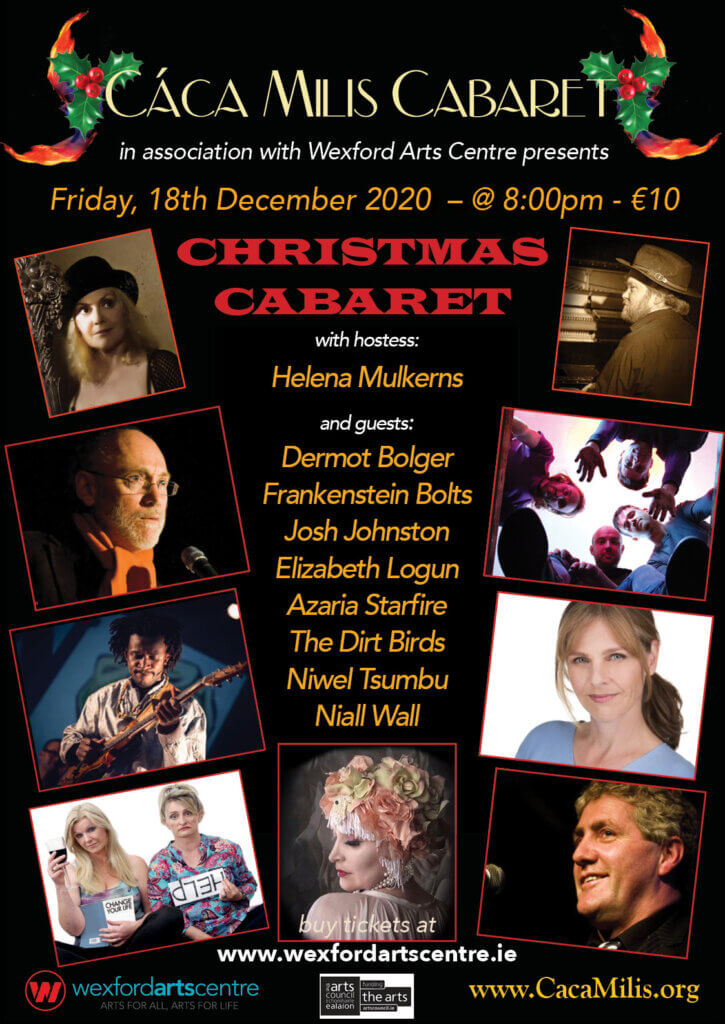 Join us after you get back from your Christmas shopping on Friday, 18th December next at 8pm for a festive celebration of the arts with the Cáca Milis Cabaret.  There’ll be music, dance, spoken word, comedy, cabaret and more, scroll down for full details.  Meantime, you can purchase tickets from the Wexford Arts Centre website here.  Here’s what’s in store:

Helena Mulkerns
In the tradition of old time music hall, the lighting of the lamp by the Mistress of Ceremonies kicks off the evening’s performance. – www.HelenaMulkerns.com

Josh Johnston
with some piano music for the festive season – www.JoshJohnston.com

Azaria Starfire
is back by popular demand: the ever elegant dancer and events coordinator is here to thrill you with a gorgeous piece inspired by the elegance and classic moves of Folies Bergère cabaret legend Lois Fuller.

Elizabeth Logun
is an award-winning dramatist whose plays have been produced in New York and Los Angeles, where she is a member of the Ensemble Studio Theatre.  Logun appeared in numerous plays off Broadway and was also an integral part of the original “Clumsy Cabaret” in the infamous Sin-é Café in New York’s East Village.

Frankenstein Bolts
One of Wexford’s top contemporary music acts. Their understated build up following a debut album resulted in a mega response to their second album, Aglow and Spark, marking them as an act to look out for.  www.facebook.com/FrankensteinBolts

The Dirt Birds
Otherwise known as comedy duo Sinead Culbert and Sue Collins. They’ve been tearing up the Internet with their wacky and merciless comedy sketches over the past few years, and tonight they’ll be delivering some cutting edge video analysis on the year that’s in it. www.DirtBirds.net

Niall Wall
And what would the evening be without a Christmas song? We’re delighted that the joyous task this evening falls to award-winning Sean Nós singer, arts innovator and Wexford Renaissance man, Niall Wall.

Niwell Tsumbu
Originally from Congo, Niwel has worked his craft in Congo, Paris and in Ireland since 2004. He is distinguished for his unique guitar style, and his sound has been described as “a distinctive fusion of new jazz, rhumba, world, flamenco, rock, soukous and classical music. www.facebook.com/Niwel-Tsumbu-Sounds

The Cáca Milis Cabaret is an eclectic evening of the arts that has become a staple in the Irish South East’s arts scene, delivered somewhat in the joyous spirit of old time Music Hall, but presenting all original work with an emphasis on technical quality, diversity and artistic excellence. Since 2009, founder Helena Mulkerns has presented around 600 Irish and international performers on its boards – both in The Wexford Arts Centre, Dublin and further afield.

This is a ZOOM event and comes to you through the technical expertise work of the Wexford Arts Centre – Ireland’s oldest regional arts centre.  The WAC is a registered charity, and all ticket sales go towards supporting cabaret artists and the continuing work of the centre, whose work at this time is now more important than ever.  You can check out all the fabulous online and in house events at the arts centre HERE